My favorite was a Van Morrison album, “Unplugged In The Studio.” Featuring the mystic, astral, Irish Morrison. A super spare record. Up bass, rhythm guitar, vocals, and the occasional drum kit.

It belonged to a painter, one of two who painted the carriage house I rented that summer. They’d roll up early in the morning and park in the driveway. I’d lie in my bed, under thin summer sheets and a paddle fan, and listen to the truck doors slam.  I wanted up and dressed before the first ladder stretched; before the painter would climb to my window with yesterday’s request.

He played music while he painted. A ?uestlove-sized music collection made from discarded .mp3 players and tossed out iPods. Instrumental Irish music. Ballads. Wilco. Prine. When something was especially good, I’d stick my head out the window. “What’s that?” I’d ask. Sometimes he knew, sometimes he didn’t. “I don’t know,” he’d say. “I’ll burn it for you.”

And It Stoned Me. That record. That summer. No AC (I wouldn’t turn it on), lazy from the heat, bummed from lack of funds, landlocked and listening, wishing for water and searching online for lakes and swimming holes.

“places to swim in nc”

Underscored by that soundtrack, and that summer, I found The Great Dismal Swamp. Created by the last major shift of the continental shelf, the swamp took in maroons, poets, escapists and outliers. And I wanted in. Wanted to be took in.

So for the last two years I’ve chased the “taking in.” Traveling. Writing, buying books and losing books about the swamp. Filled four composition notebooks and one giant drawing pad with notes and put them all together in a mini-song cycle, poised to release summer 2014. 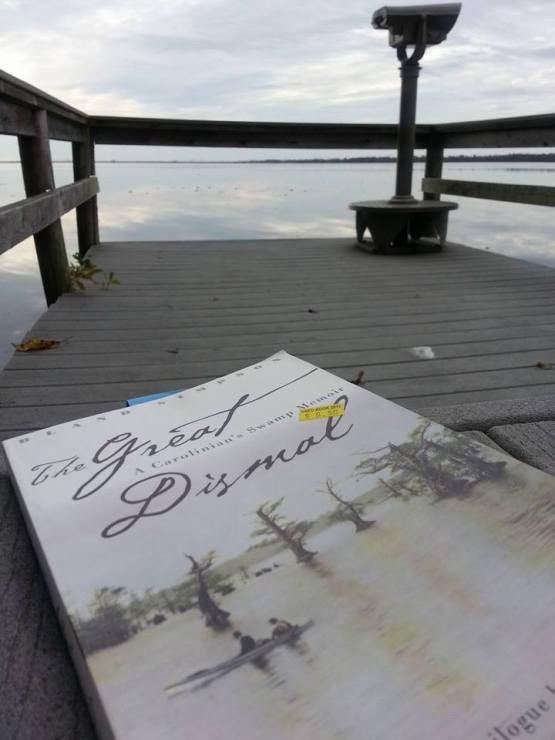 Sitting with a copy of the book by Bland Simpson at the dock at Lake Drummond.

What good is a word without pictures?

There was an error retrieving images from Instagram. An attempt will be remade in a few minutes.