In 1913, the Great Dismal Swamp saw the grand opening of the James Adams Floating Theater. It was one of the last active showboats in America, a tradition born in the southern United States where rivers, not railroads, brought the goods to town. Founded by a circus aerialist, the theater company and crew inspired the great American novel—“Showboat.” The novel inspired the musical and the epic ballad, “Ol’ Man River.” 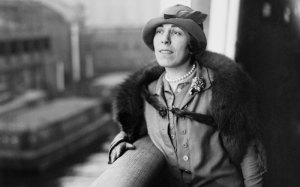 Edna Ferber spent time on the James doing research for her book, “Showboat.”

In 1924, the idea of a floating theater caught the attention of pulitzer prize winning novelist, Edna Ferber. A former newspaper writer in Wisconsin, Ferber found the James and hitched a ride south, and narrowly missed the boat. Cast and crew were headed for Elizabeth City, North Carolina to dock for the winter.

Edna came back the next spring to Bath, North Carolina where she boarded, worked and lived on the boat, taking tickets for shows.

“The players rehearsed in the daytime and performed and night. This arrangement amused Edna, for it was a source of constant feud between the actors and the tugboat crew. The players—with music, talk, and laughter—often kept the crew awake at night. The crew, in turn, was loud with daily activity that disrupted the morning sleep of the bleary eyed actors,” via NC Historic Sites.

When possible, Ferber spent time interviewing the theater owner and lead actor Charles Hunter. When the company’s original owners retired, they passed the business on to Hunter, a friend and former circus colleague. Hunter was generous with his time, talking, as Ferber filled her notebooks. She eventually collected her notes, said goodbye to the James, and sailed for Europe in 1925. She landed in Cote Basque, a tiny fishing port town in the south of France where she wrote the book, “Showboat.” It published in 1926.

“After this close brush with fame, the Floating Theater changed her name to Show Boat and startled the natives of the Tidewater when she appeared with a rakish coat of scarlet paint, like a dowager, just out of a beauty parlor. Her nightly audience became more sophisticated, with a liberal sprinkling of city folks who thought the Show Boat ‘a quaint adventure.’ Pillars of the church reserved seats close to the orchestra, feeling no qualms of conscience,” via Showboat on the Bay, Floating Theater, by Miriam Haynie

Among the melodramas at the theater were stories that would “shed a tear but you leave smiling.” The stories were the 1920s version of the sitcom. Themes were family friendly—dealing mostly with maternal oppression, love disollusion, and desert.

I tried to track down some of those old plays and couldn’t find any (I really didn’t try that hard). I wanted to write a little mini-melodrama myself, something that captured the innocence that the swamp had, still has, and one Bland Simpson wrote about in his memoir, “The Great Dismal: A Carolinian’s Memoir.”

The song, the fifth in the series, “Where’d Your Church Clothes Go?” tries to capture that spirit of the James in a short story about a girl who loses her Sunday dress every time she goes out to play in the swamp. Turns out the stiff dresses and crinoline skirts made the perfect canvas surface to stretch across the wooden hull of a canoe she was building to float in Lake Drummond.